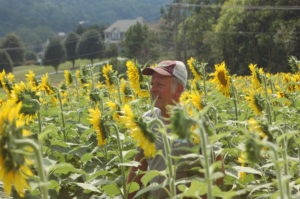 The Wickline family started milking register Guernsey cattle in 1927. Over the years the heard was built up to 120 milking cows. They were milked twice a day, 7 days a week. Cows were bred and the resulting calves were added to the heard. The calves were bottle fed twice a day until they were three months old, then they were moved to another lot to grow. Once old enough they were added to the milking line. In September of 2019 the family had to make the hard decision, after 92 years, to sell out of the dairy business. Rising cost and little return were part of the cause. Now, the farm raises beef cattle, hay, straw and corn for sale. Frank Preston Wickline III, Bradley Wickline (Preston’s son) and Charles Provost (Preston’s brother) run the farm.

In 2015 Preston planted 20 acres of black oil sunflowers because “he liked them.” In 2016, about three weeks before the flowers were to bloom Candace approached him with the idea of having a sunflower festival. Being a farmer all his life Preston was skeptical (to say the least) of having visitors to the farm and the thought of asking visitors to PAY to see a flower he just couldn’t understand. In September that year the first festival was held attracting visitors from surrounding counties and states. The goal was 200-300 people that first day of the festival, by the end of the 7 hours that goal was far surpassed. Preston commented in disbelief “Well, I guess we should do this again next year.” (See photo of Preston looking in disbelief at the visitors) That first year the JRHS FFA chapter sold hot dogs and water, church groups face painted and we had a wagon ride. What a learning adventure this has been! Flash forward to 2019 and all we accomplished: Provided a JRHS graduate going into the field of Ag with a $500 scholarship. We had local school, church and community groups face paint at the festival with us supplying all of the supplies so they could retain all of the profits. A total of $947.00 was raised with these groups. Offered positions available for sponsors to work in their volunteer hours. We introduced our “Sunflower Story Coloring Book,” (Illustrated and written by Candace) free of charge, to 7 Roanoke City Schools, and Botetourt, Craig, Rockbridge Counties and Covington City Schools. Kept our entry fee low so it is affordable to families. We supported local churches, schools and non-profit groups, 6 in total, by having them set up at the festival for free to offer their food products. Those groups profited a total of $16,363.00, all of which stayed in the community! Offered 3 special day’s during the week for preschools, senior citizens and special needs children and adults to visit the flowers so they could enjoy it and move around easier. We had a total of over 65 hand made craft vendors and food vendors, each one providing a unique and different item. And finally, we had visitors from over 18 states visit. We are excited to celebrate our 5th year in September 2020!

This is a demo store for testing purposes — no orders shall be fulfilled. Dismiss